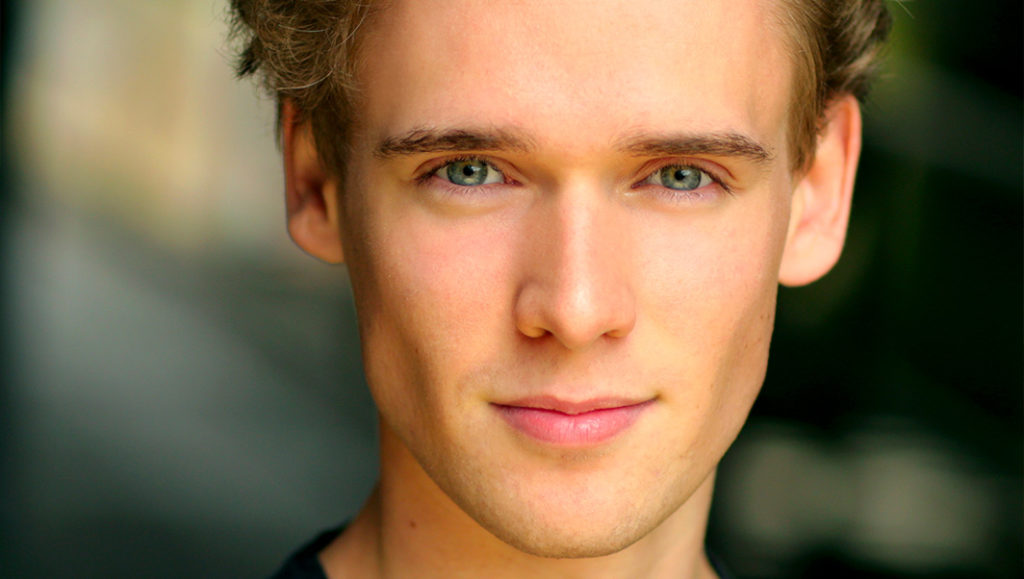 Harry Jarvis is an exciting up-and-coming actor who’s pulling out all the stops for his new film High Strung Free Dance. Set in New York City, High Strung Free Dance follows two aspiring artists struggling to make their dreams come true. Harry’s character, Charlie, is a charismatic piano player with music coursing through his veins, looking for any opportunity to hone his craft. It’s a story that hits close to home for Harry, who drew parallels with his own journey as an artist. Pop-Culturalist had the pleasure of chatting with Harry about High Strung Free Dance.

P-C: High Strung Free Dance is out on Blu-ray, DVD, and VOD. Tell us about the film and your character in the film.
Harry: High Strung is a dance-music film about two aspiring artists, Barlow [Juliet Doherty] and Charlie—I play Charlie—who are struggling to get their big breaks. They’re going on auditions and getting turned down. In the film, they both try to get into a production called Free Dance. It’s run by a temperamental choreographer named Zander Raines [Thomas Doherty]. Not to spoil anything, but when the two of them make it into the show, it’s a bit of a roller coaster. It’s an exploration of a young artist’s life in New York and how difficult it is, but also how enjoyable it can be.

P-C: What attracted you to this project?
Harry: One of the things that attracted me to this project was I got to learn all the songs that Charlie plays in the film. I got to learn a new skill. I have a very basic understanding of piano. I had to learn eighteen songs in two months. Now, I feel quite comfortable on the piano, which was a huge attraction. Also, Thomas, who plays Zander, I’ve known him for a few years. Now, we’re really, really good mates. I was very excited to work with him. I got to work with people like Jane Seymour, who is iconic. We had such a fantastic cast. Those were the two big things that attracted me to the project.

P-C: There’s a scene in the film where Rose tells Charlie that art chooses them. How did you discover your passion for acting?
Harry: I was eight years old and in elementary school. [laughs] For some reason, my teacher at the time made us do Shakespeare, which was never going to end up well. I tried it and I was probably terrible, but I really enjoyed it and got such a thrill from it. I started joining drama clubs. I ended up playing Peter Pan in green tights. I’m sure I looked fantastic. [laughs] I really discovered it from my school just being such an inspiring place. It helped me come out of my shell and interact with people. It definitely helps you become more of a people’s person, which was something as I was younger, I wasn’t able to do. I was very much a nerd.

P-C: Like you said earlier, the film centers around these two aspiring artists who are struggling to make it in their respective fields. Did you draw on any personal experiences in creating/shaping Charlie?
Harry: Of course! You go on audition after audition. You hear things like “It’s a numbers game. You’ll get there eventually.” There have been huge periods where I haven’t worked. There were moments when I questioned whether this was the right field for me and whether I should quit. It can be frustrating. You spend hours preparing and creating something that you’re really proud of, only to find out that they weren’t listening, or you have to redo it because there were camera difficulties. I absolutely drew on my own personal experiences. Trying to be an actor and an artist in general, you’re constantly dealing with rejection, just like Charlie does. I know Juliet did as well. She’s a ballet dancer who’s incredible, and she’s made such a name for herself. She’s been through tons of rejection as well. It struck a chord with us.

P-C: How did you overcome those moments of self-doubt. What advice would you give to someone looking to pursue a career in a similar field?
Harry: I have a great support system of family and friends. Over time, I’ve seen those moments as an opportunity to work harder. What am I doing wrong? Something’s not happening. Let’s change it up. Let’s work harder on this. Let’s find different ideas. Let’s be more creative. Let’s go to class. Let’s speak to friends. That was how I got out of a bad groove. If you’re passionate about what you’re doing, you will get there eventually. You just have to keep working hard at it. As far as advice, it’s just that. Don’t lose hope, and keep looking for ways to improve. If something’s going wrong over and over again, eventually you have to take ownership. Maybe there’s something that you can change. Go out there and try and find a way to make things different. Apply to different places. Open your circle and expand your horizons. One of my favorite quotes is from Winston Churchill, “Success consists of going from failure to failure without loss of enthusiasm,” and that’s really true. 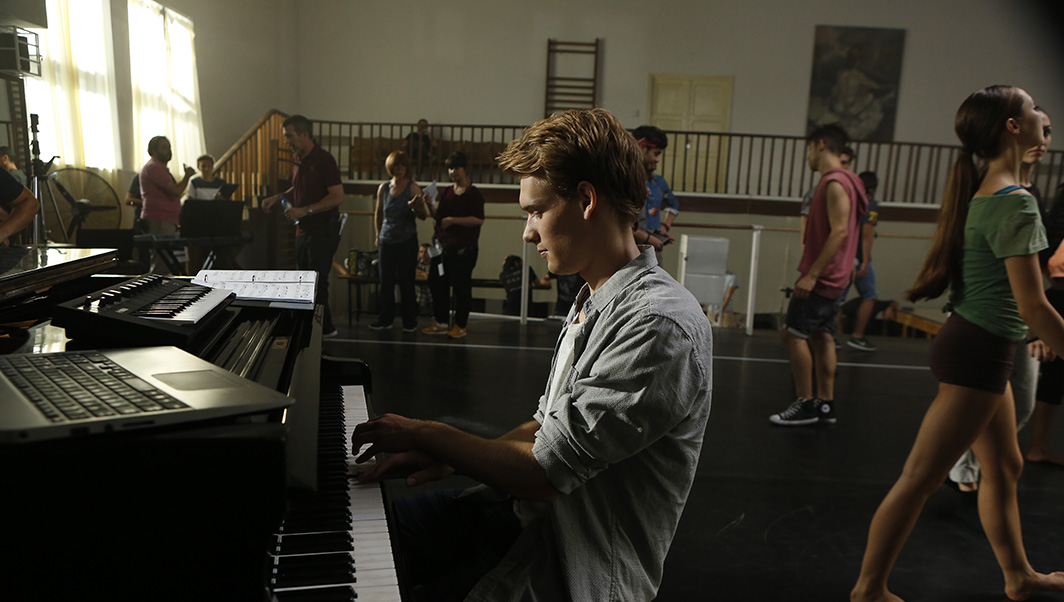 Photo Credit: JoBee
P-C: Charlie has a lot of interesting relationships within the film. Which was your favorite to explore and why?
Harry: I love his relationship with Rose. Like you said, he does have a lot of really interesting relationship. Charlie and Zander have a very tension relationship. Him and Barlow have a very lovely relationship. I also love his relationships with his friends at the deli. But there’s something really sweet between him and Rose. Initially, it’s this sort of awkward relationship, and it blossoms over time. She becomes almost like a mentor to Charlie but more than that. She becomes this motherly figure. You never see Charlie’s parents in the film, but Rose adopts that role. Also, Kika Markham, who plays Rose, is one of the most lovely people that I’ve ever worked with. We actually only had three days together, but we had the best time. She got me a little present that I still have in my room today.

P-C: There’s great chemistry that comes off the screen between the entire cast. How did you all build that bond?
Harry: There’s a lot of dance and piano in the movie, so we couldn’t go straight into shooting. We had a lot of rehearsal. The dancers had a month and a half of rehearsal. Thomas and I came in three weeks into their rehearsal. We all stayed at the same hotel. We had dinners together. We went to the gym together. We spent time together in the hot tub and the pool. We did activities together. We were working and living together like they do in the film. Two weeks in, everyone knew each other’s secrets. [laughs] The chemistry just developed quickly and naturally, especially between Thomas, Juliet, and I. We spent every moment together. I saw Thomas two days ago. He’s one of my best friends out here. He’s a great guy.

P-C: With the film out now, what do you hope audiences take away?
Harry: I want people to be inspired. I hope they’re inspired to do something. Like we were chatting about before, if there’s something they’re struggling with and are looking for inspiration, High Strung really does that. Not everything will be easy pickings, but there’s a beautiful light at the end of the tunnel. That’s the art that we all hope to create.

P-C: Favorite book?
Harry: I used to love the Percy Jackson series. But there is this old English series, which again is probably a guilty pleasure, called CHERUB. It was a spy series for children. Up until I was eighteen or nineteen, I was still reading those books. I’m also a huge Harry Potter fan. If anyone hasn’t read the CHERUB series, I highly recommend giving it a go.

P-C: A band or artist that fans would be surprised to learn is on your playlist?
Harry: I love the Arctic Monkeys, but I don’t think anyone would be surprised to learn that’s on my playlist. There are these artists named FKJ and Tom Misch, and they make the most interesting soundscape music. Here’s one that will surprise people: Busted. They’re an old English boyband.

P-C: Who would play you in the story of your life?
Harry: I feel like if Niall Horan got into acting, he’d be jumping at that. Who I want to play me would probably end up being completely different than who would end up playing me. [laughs] I would want Leo DiCaprio. He’s an incredible actor.